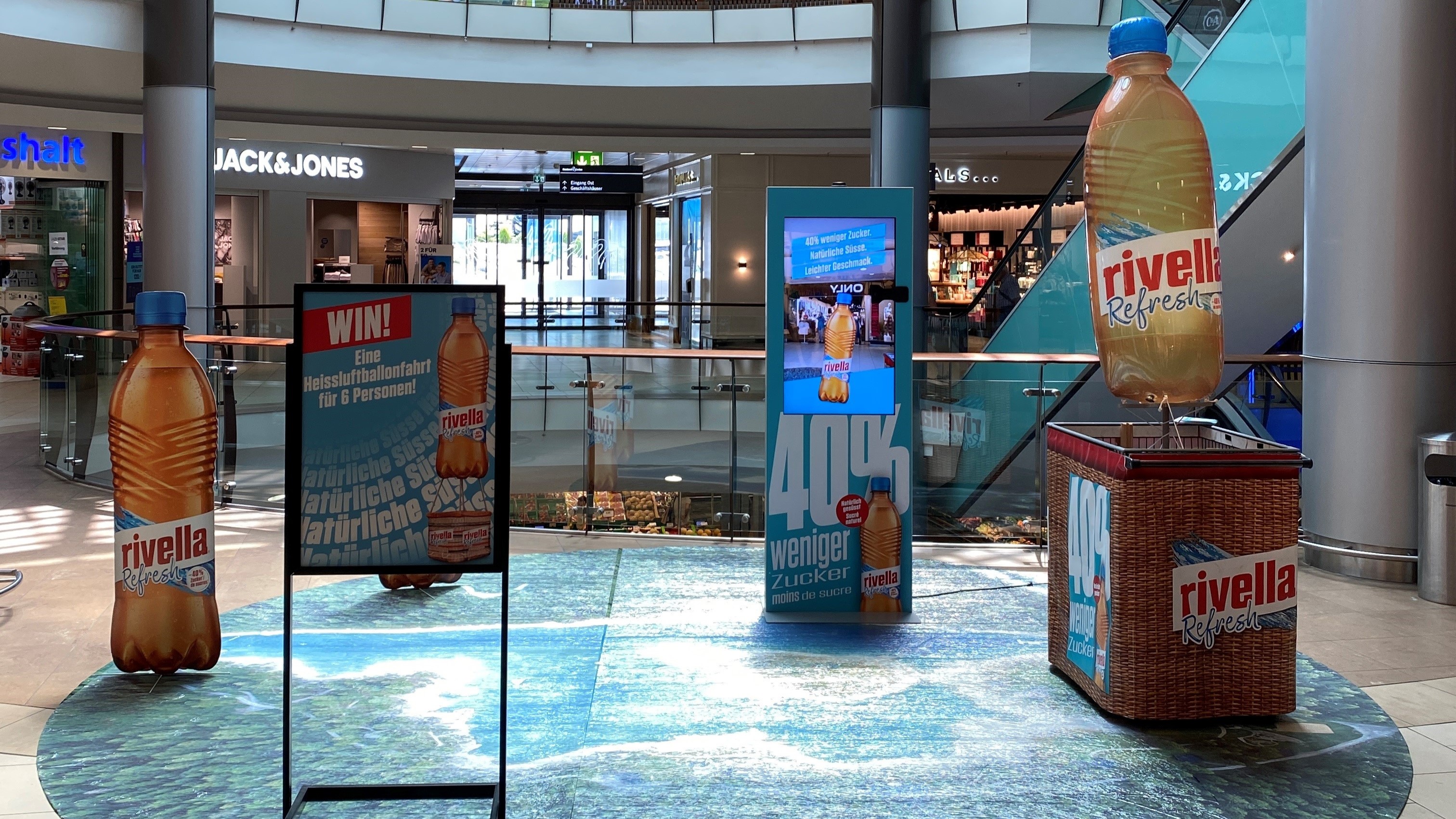 For the third time, Rivella is using augmented reality in Swiss train stations, beverage cash-and-carry markets and shopping centers to distribute product samples interactively and automatically in a marketing campaign to provide information about Rivella Refresh.

Via the label of the promotional bottles, passers-by reach a WebAR experience with a competition on their smartphone, where a virtual Rivella Refresh bottle can be placed in the environment and viewed all around. Bubbles rise around it, creatively symbolizing the benefits of Rivella Refresh: natural sweetness, 40% less sugar and light taste. "Through the possibility of augmented reality, which is triggered by scanning the QR code on the bottle, the product benefits are explained interactively. This provides a digital brand experience, and handing out flyers can also be dispensed with in the interests of sustainability," says Andrea Murer, head of live marketing at Rivella.

To get passers-by in shopping centers interacting even more with Rivella Refresh, they can also find out about the product benefits in a playful way. In an interactive AR-based game, the goal is to burst as many bubbles as possible with a virtual pin using gesture control and earn a personal high score. In keeping with the drink, sugar bubbles are to be avoided. Afterwards, there is a free Rivella Refresh from the promotion team as well as the chance to take part in a prize draw involving a balloon trip. The same game is also included in the so-called Digital Sampler from Sensape, which can be found in selected beverage cash-and-carry stores during the promotional period. If passers-by play the game, however, they can be refreshed afterwards quite automatically. "Our artificial intelligence recognizes when someone is standing in front of the Digital Sampler and automatically starts the game. The Digital Sampler combines AR game and beverage dispenser and automatically dispenses a Rivella Refresh as soon as the game has been played," says Michael Lehnert, who coordinates the collaboration with Rivella at Sensape. "The opportunity to use gamification to highlight product benefits has been well received by customers. Participation in the Game has had a good response rate to date. Here, too, additional product flyers can be dispensed with in the interests of sustainability," says Senam Lumor, Head of Trade Marketing at Rivella.

In total, more than one million product samples have already been distributed automatically via AI. Always in use is the so-called mirror effect, which describes that people's attention can be quickly attracted as soon as they recognize themselves in the mirror. Sensape solves this via the 42" AR display with camera, on which passers-by see themselves.

SENSAPE GmbH, based in Leipzig, Germany, develops and markets products for interactive and intelligent customer engagement. Founded in 2015, the company currently employs 25 people. Customers include Deutsche Bahn, Rittersport, Oreo, Haufe Lexware, Commerzbank, Porsche and over 300 other medium-sized companies and corporations. With customer installations in more than 30 countries, among them the USA, China, Japan, Italy, Spain and Dubai, the SENSAPE GmbH confirms its international authority and the urge to the expansion.Press contact:  Hanna Schubert, schubert@sensape.com, +49 (0)1579-23 60 18 4 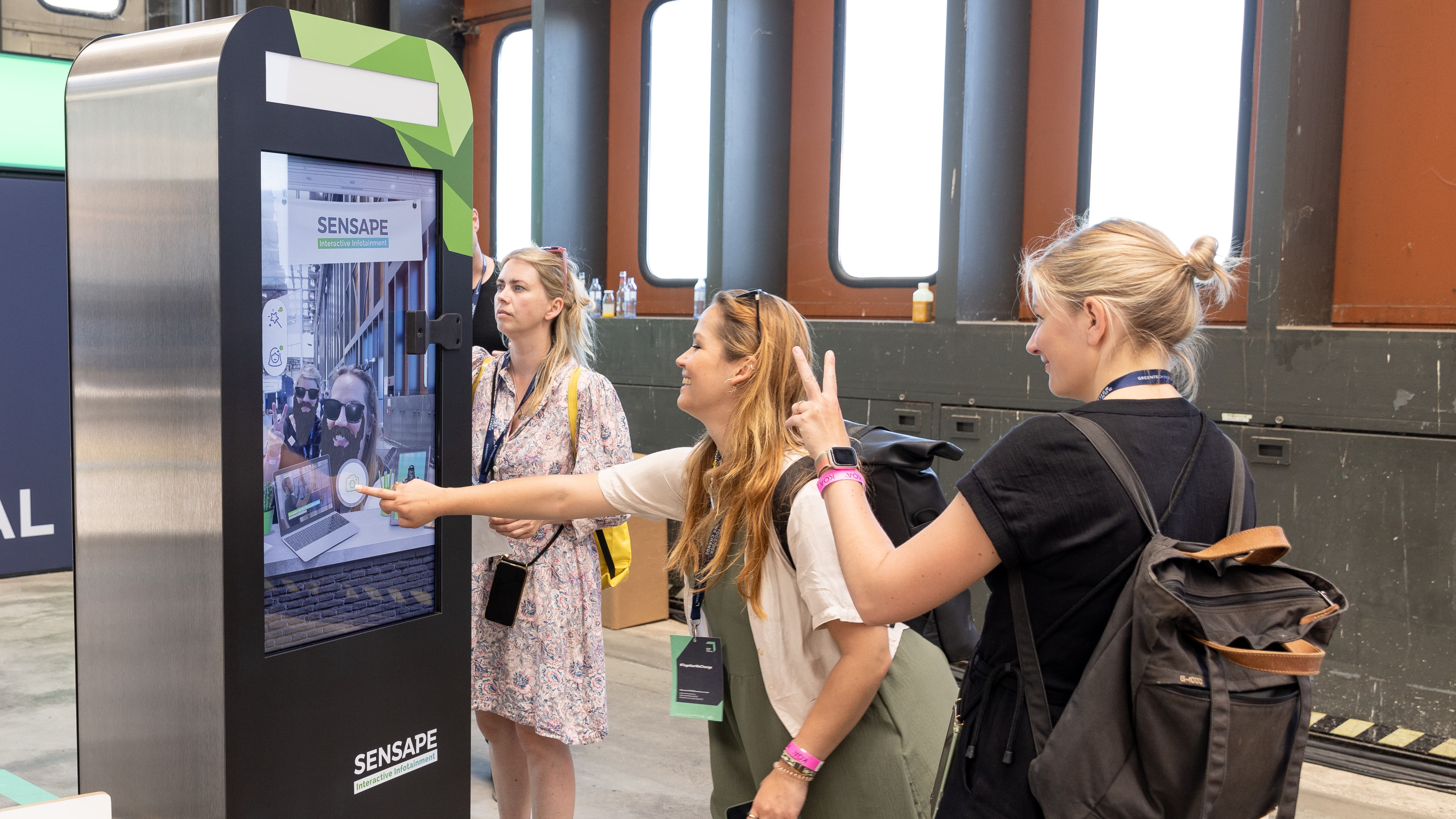 Make AR the new frontier of your brand!
Bridge the gap between the digital and physical world.
Get in touch
Thank you! Your submission has been received!
Oops! Something went wrong while submitting the form.
ImprintData SecurityPrivacy FAQPress